by education
in School Edu, Spotlight
0

The more than 18 month-long pandemic induced closures of schools and now their incremental reopening is not a usual back to school story. Rather there are lessons, imperatives and valid reasons to see it as a transformation of the education system itself

Many people believe the school reopening was tactically delayed by months in India because of the pressure created by edtech companies and their influential lobbyists even as most statistics from surveys clearly said that young Indians have lost the precious learning curve and  the environment in last two years. The surge in greater adaptability to digital education emerged as the alternative and Smartphone ownership has almost doubled from 36.5% in 2018 to 67.6% in 2021 (ASER 2021), confirms some of this notion. A divide has emerged on the reopening itself with a set of worried parents still reluctant to send their children school unless reassurance comes through things like vaccination or the pandemic shows signs of losing its killing steam. The other set of parents, mostly from the disadvantaged background and digital divide, are happily welcoming school reopening.  At the same time most expert opinion is indeed in the favor of back to school.

According to Dr Vandana Prasad, community pediatrician and National Convenor and Technical Advisor for Public Health Resource Network (PHRN) besides a former member of NCPCR, after home, school is the second most important space of care for children and has been disrupted by pandemic. “Parents, authorities and schools are naturally worried. It is a complex situation and changes in data and context about the virus are unpredictable. In this case, experts are the only people who can guide and need to give assurance. And we know there are no high risks for children in this phase. The schools  in fact , could have reopened a few months back,” she said.

The damage from prolonged school closures is almost a confirmed conclusion with more findings come to fore.  A recent national survey conducted by LIRNEasia, a regional think tank working on digital policy issues across the Asia Pacific, and ICRIER, a policy oriented economic policy think tank based in Delhi showed that only 20% of school-aged children who were enrolled in the formal education system received remote education during COVID-19 induced school closures. The findings released on November 12 said the other 80% of children, however, were left behind.

Many of the 20% who were able to access education during school closures did so through multiple channels. However, these students’ experiences were heterogeneous. Only 55% of students (of this small group who received some education) participated in live (real time) online lessons, while 68% watched recorded video lessons and 75% had information and assignments communicated to their smartphones through channels such as WhatsApp. It is also noteworthy that 58% of these students also had contact with schools through offline channels, with information and assignments being physically delivered to their homes.

The challenges faced by those receiving and not receiving education also differed. The parents of those who received education said their key challenges were their children not being attentive, schools being unprepared to deliver online education and high data costs. Meanwhile, the most cited challenges of those who didn’t receive education were poor connectivity (3G and 4G signal) in their area, and insufficient devices at home to meet the competing needs of all their family members.

“The pandemic made the education gap worse, impacting students from disadvantaged households the most. But it wasn’t just a connectivity problem schools were caught off-guard and were not prepared to deliver online lessons in the first round of lockdowns. Luckily things did improve in the subsequent shut downs. But unless a mix of real time online and self directed learning and meaningful feedback is provided, the learning gaps probably were not bridged” said the CEO of LIRNEasia,Helani Galpaya.

Another report by Mumbai-based nonprofit Pratham Education Foundation almost mirrored some of these findings  The 16th Annual Status of Education Report (Rural) 2021 or ASER 2021 released on November 17 confirms greater adaptability of digital education as Smartphone ownership has almost doubled from 36.5% in 2018 to 67.6% in 2021. But at the same time, a great variation has been observed in possession of devices with Kerala having 80.9% in contrast to Bihar’s 27.2%.  More children in private schools have a smartphone at home (79%) than government school going children (63.7%). Even gradewise senior class students have more access than junior ones. As parents’ education level increases, the likelihood that the household has a smartphone also increases. Over 80% children with parents who have studied up to Std IX or higher had a smartphone at home, as compared to just over 50% children whose parents had studied till Std V or less.

The report also found a big increase in children taking tuition has been seen in the survey results from 30% in 2018 to almost 40% in 2021, across gender, grades and school types. Tuition is up across the country in all states except Kerala. The proportion of children with parents in the ‘low’ education category who are taking tuition increased by 12.6 percentage points, as opposed to a 7.2 percentage point increase among children with parents in the ‘high’ education category. Tuition classes are more common among children whose schools were still closed at the time of the survey.

Back to school is not yesterday’s normal

According to Geeta Menon, a senior consultant in Early Education and Academics, the development of children is a combination of processes—physical, biological, psychological and social. This development is nurtured through age appropriate processes that are highly disturbed during emergencies. The fear gives rise to anxiety and students are not able to concentrate.  It shakes the children subconsciously in a big way. “The wellbeing of learners is important  as he or she being the critical stakeholder. And their protective environment needs to be well understood in this time of crisis. The protective environment has two components. One is physical where you have to follow protocols of sanitation, physical distancing, etc and other is psychological. This environment has to be free from fear, the triggers have to be recognized and sanitized. Assessments, teacher behavior, rules and regulations that pressurize children need to be thoroughly sanitized as we welcome children back to school ,” she added.  For this specialists and resource agencies have to be integrated with the school system and importantly teachers need training to handle all this.

Opining on the pandemic scare and precautions, Dr Vandana Prasad says  periodic quality checking should become part of routine and schools should enter into formal arrangement with primary healthcare centres.  “If unvaccinated teachers are an issue, they can be put on digital mode. Children in this phase are doing well and there should be no rush for vaccination. No terrible side effects are reported. We shouldn’t go overboard with masking. Ventilation is important and this time of year is good for opening windows and doors. Best will be class rooms in the open,” she adds.

The next big challenge in back to school is the classroom and actual learning. According to Prof Anita Rampal, former dean of department of education at Delhi University, states will have to look at redesigning and restructuring syllabi for the next two years while working closely with teachers.  “Encourage participatory group learning than individual students. There is a real fear that some students will have inferior complexes and fears about being signaled for not catching up or understanding after this long gap .  But the reduction or rationalization shouldn’t be as was done last year in removing topics like citizenship. Teachers engagement with keep children learning activities like open experiments, narrating stories is critical,” she said.

Teachers themselves are perplexed

There is a real danger of teachers becoming complacent and losing professionalism in face of the technology push particularly with this pandemic.  “There is now an assumption that digital literacy and digital working is adapting to new way of working and has been chosen by the government. There is a deficit of teacher perspective in this whole debate. Teacher-child relationships, pedagogical issues, involvement of children and teachers as intellectual social beings all are strained,” said Prof Poonam Batra, Professor of Education at the Central Institute of Education, University of Delhi. Citing a recent study on voices of teachers by UNESCO, she said that teachers are feeling they being robbed of their roles. “Now the fashion is teachers need to be told, given everything and made just conduits in this pipeline of passing outsourced learning and assessment material to their students. The teachers are being deprived of their primary duty as teachers,” she added. Children are not anonymous statistics, they come from diverse backgrounds from a certain social milieu, have own aspirations and constraints and this makes role and presence of teachers compelling. “Teachers feel the little agency they had in the classroom has been snatched in online. Now we are just servants,” she said.

Citing how online was harsh on teachers, she added that teachers have accountability to the system though it should be the other way round. “Now teachers are accountable to edtech companies, online surveillance of parents (on dress, pronunciation at least), nodal officers who keep a watch. Utilitarian role of teachers already institutionalized has got crystallized. This is dangerous and will have a price. Teachers always remain and should remain critical”, she emphasized.

In conclusion, back to school is not the pre-covid normal but a new challenge that needs recognition, which hopefully will lead to strategies and plans by education departments and schools in meeting this. Governments must take note of this transformation and what impact will it have on the future of school education in this country. Only then, will the school education system become benign and responsive to education emergency of past 18 months. 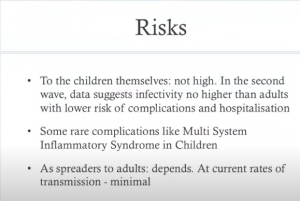 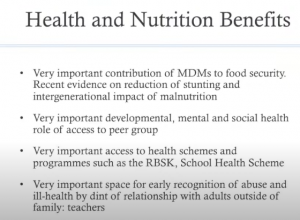 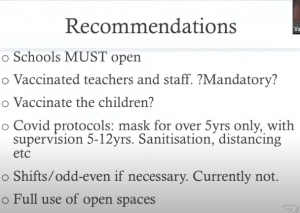 (The quotes of Geeta Menon, Prof Rampal, Prof Batra, Dr Prasad used in the feature story are from RTE Forum’s Safe Reopening of Schools focusing on Denial & Deprivation of Learning , Teacher Development and Pedagogy- Consultation No-2 held on Nov 26)

Yoga to be included in the school curriculum in Madhya Pradesh

Yoga to be included in the school curriculum in Madhya Pradesh