The two national school boards—CBSE and ICSE, having cancelled class 12th board examinations due to covid, have submitted their evaluation scheme for purpose of preparing the results. The results of both boards will be declared on before July 31.

This was submitted in the Supreme Court during hearing of a petition on cancellation of class 12 board examinations by the two boards. The petition was filed on May 27 by advocate Mamta Sharma in support of cancellation demand made by a large section of students appearing in these examinations. The Government on June 1 had ordered cancellation of these exams and this was conveyed to the apex court on June 3.

After submitting in the Supreme Court that it will decide on objective assessment of  now cancelled 12th class board examinations, the  Central Board of Secondary Education (CBSE) has constituted a 13-member committee for setting well-defined objective criteria for Class 12 Board Examination Assessment 2020-2021. On June 17, the board submitted the scheme, which was accepted by the court in principle.

While as CBSE will use class X, class XI and class XII midterm/pre-board assessment in the proportion of 30%, 30% and 40% weightage for scores respectively, ICSE has proposed a scheme to compute marks based on performance of students in the last 6 years.

The counsel for CBSE also told the top court that results will be declared by July 31. Further, students who are not satisfied with the assessment, done based on the policy will be given an opportunity to appear in examinations to be conducted by the board when conditions are conducive for holding the examinations. As per this policy, marks scored in later examination will be considered as final. 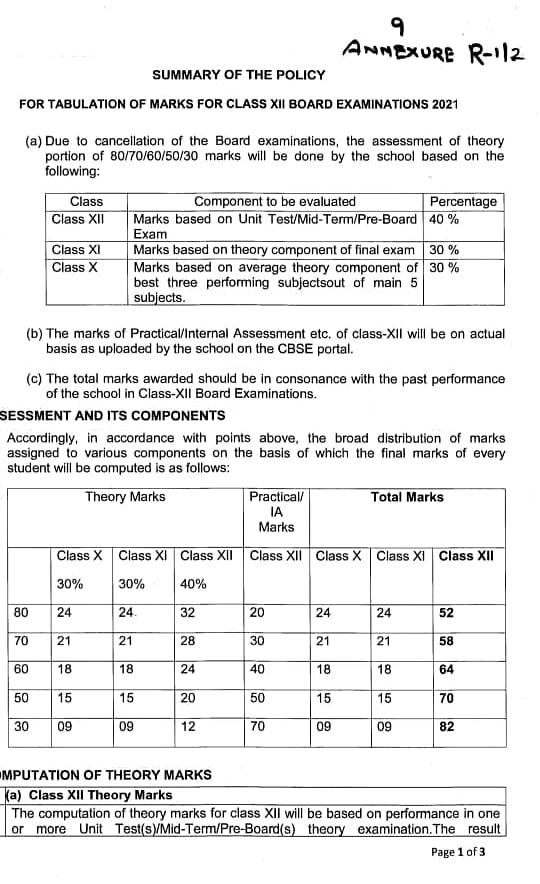 “After hearing parties we have no manner of doubt that this scheme be taken forward. we have in principle accepted the scheme. In any case students will get an opportunity to appear in an exam to improve their marks. Prima face we have no reservation to accept the same and permit the boards to proceed on this basis,” the Court said. The Court, however, added that the scheme must incorporate two aspects.“First is dispute resolution in case students want correction of final results declared. Second, is about timeline for declaration of results and the date before which optional exam be conducted,” the Court said.

The Court said that CBSE and ICSE are at liberty to notify their schemes incorporating the directions by the Court regarding dispute resolution, timeline for declaration results and date of optional exam.

The Supreme Court will pass a detailed order on the petition on June 21.

“Matter will be taken up on 21st June to give hearing only in respect of their suggestions to the proposed methodology,” tweet advocate Mamta Sharma, the petitioner who moved the Supreme Court for cancellation of the board exams due to second wave of covid pandemic.

“Out of 28 states, 24 states have cancelled the class 12 board examinations. 4 states have not cancelled namely Assam, Punjab, Tripura and AP. The petitioners to serve the standing counsel of these four states,” the Court ordered. The Court also issued notice to four States, Assam, Punjab, Tripura and Andhra Pradesh which have not yet cancelled their State syllabus board exams. The Court also noted that Kerala has not cancelled class 11 exams. Hence, it directed that a copy of plea be served on standing counsel of Kerala.