The return of more than 15000 medical students to home in the wake of Ukraine war in February this year has since shifted a deep focus on the state of Medical Education in India and why so many students seek Eastern Europe countries and China. A new report by Anand Rathi Research has analyzed the issues involved in country’s Medical Education and lauded PPP models and made suggestions to improve health of medical education system in the country still under-provisioned for a required doctor-to-population ratio of 1: 1100 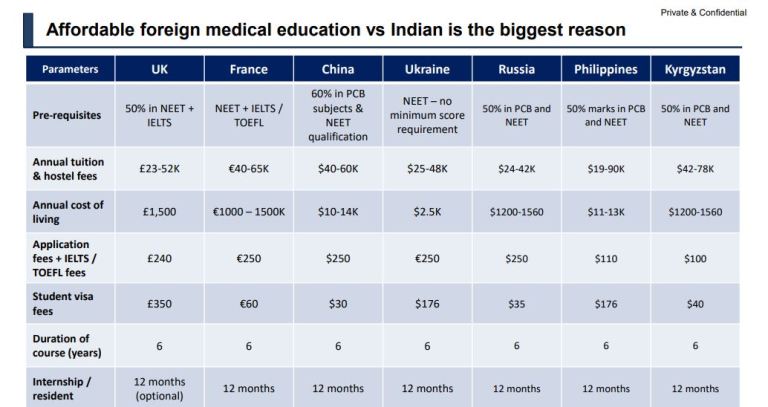 Lack of standardization of fees and significant variation in quota reservation across the states and no regulation / minimum criteria for students taking admission in foreign colleges which imparts low quality medical education are key issues from ARAL findings. Limited number of medical seats, the high threshold required for government colleges and the high cost of medical education in private medical colleges have resulted in this huge exodus of Indian students to foreign jurisdictions as well. Saying that China, Ukraine, Philippines and Russia account for ~ 60% of the student outflow from India, the report highlights that upon completing medical studies at foreign universities, the candidates are required to appear for a ‘Screening Test – FMGE’ to be eligible for a license to practice in India. “Medical education abroad has gained much traction as there is limited competition, which makes it easily accessible and is cheaper than in India.

Foreign universities require only a 138 NEET score, against 550 out of 700 in government medical college in India. Also, knowing about this fierce competition, many students wanting to study in foreign universities often do not enroll for private coaching and avoid private-coaching expenses of ~Rs.150,000 – 350,000. By the way, as per the report coaching for NEET has also grown phenomenally all this while. ARAL study has also criticized centralization of NEET as it concluded that it favors CBSE students more than state boards and is also a factor for popularity of coaching class both for test prep and curriculum.    The report also attacks the weak evaluation process and has found that the percent of repeat exam-takers securing admission rose from 12% in FY17 to 71% in FY21.

While the report acknowledges the significant increase in number of seats for MBBS and setting up of AIIMS across India Initiation of various government reforms and targeted schemes for improvement of medical infrastructure and other segments viz. nursing, AYUSH, pharmacy, the report highlights the stringent regulations of land etc are bottlenecks in expansion of medical education. Owing to numerous challenges that afflict the medical education, the Government of India has introduced a slew of reforms to bring improvements to the medical ecosystem in India. Various innovative schemes have been rolled out to strengthen and upgrade the exiting infrastructure along withØ establishment of new medical colleges wherein government funding under majority scheme have been released  Recently, the Public Private Partnership (PPP) model for setting up medical colleges has been launched in order toØ aid the objective of increase in medical seats.

India would need to add ~ 200,000 allopathic doctors till 2030 to meet WHO requirements assuming a population of ~1.5 billion which we reckon should be manageable given there are 80,000 MBBS seats in the country even though inclusion of Ayuverdic, Unani, Siddha and homeopathic doctors, however increases the doctor-to-population ratio to 1:834, which meets the WHO requirements. “However, with the increase in disease, epidemics and pandemics, the 1:1,000 doctor-to-population ratio suggested by the W.H.O. would fall short as seen during the CVOID-19 pandemic across the globe. Hence, we recommend that such a ratio should be rationalised by considering extreme medical situations,” says the report.

Among its key recommendations, the report says that implmentation of the PPP model will help in setting up new colleges as the government will help bridge the upfront investment. This model is already gaining prominence in states such as Uttar Pradesh and Meghalaya Regulating foreign student enrolment.

Introduce measures / regulations for students who prefer taking admissions in foreign colleges such as specific jurisdictions, auditing of colleges. This will ensure quality education and will improve student performances in FMGE. 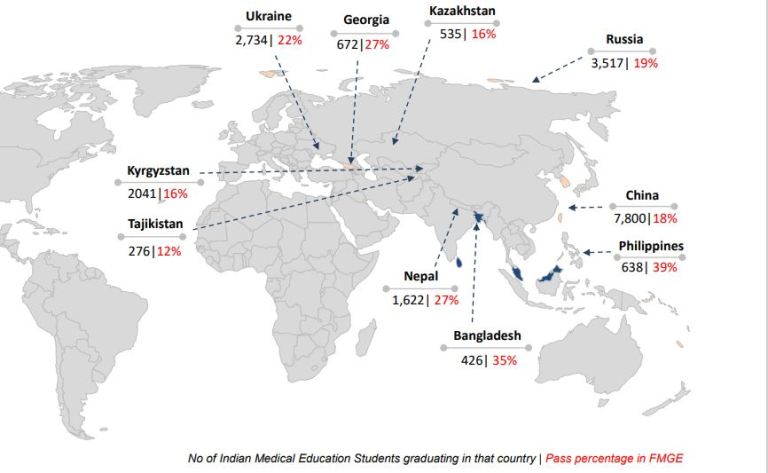 Management quota students usually have to cough up exorbitant fees to compensate the fees for students under reserved categories.  Rationalizing the fee structure and charging average fees across all categories of students will reduce the burden of high fees for management quota students in private colleges. Enabling for-profit institutions would be a pre-requisite in order invite foreign capital and similar modifications can be expected in medical education sector.

While unveiling the report, Samir Bahl, CEO – Investment Banking, Anand Rathi Advisors Ltd., said, “The Medical Education Industry report is the 4th report in the series of reports released by the Anand Rathi Investment Banking team and will pave the way for further deliberation on the theme among industry stakeholders.”