by education
in Higher Edu, Latest
0

University Grants Commission (UGC) in a major reform last week announced that students will now be able to pursue two full-time academic programmes in physical mode. “In the last commission meeting held on March 31, it was decided to issue guidelines which will enable students to pursue two academic programmes simultaneously because the NEP 2020 emphasises the need to facilitate multiple pathways to learning involving both formal and non-formal education forms, in the sense that a combination of the physical model, as well as the online form, should be used to provide more freedom to the students to acquire multiple skills,” UGC chairman, Mamidala Jagadesh Kumar said.

In a letter to universities, the UGC said that the issue of allowing students to purse two academic programs simultaneously has been examined by the Commission keeping in view the provisions envisaged in the NEP 2020 which emphasizes the need to facilitate multiple pathways to learning both formal and informal modes of education. In view of this UGC has formed guidelines and asked universities and their affiliated colleges/institutions to implement these guidelines.

At the same time critics have flayed the move saying it will not only dilute concentration and attention required for a fulltime degree program but will also eat away the already ‘limited’ seats available in HEIs. 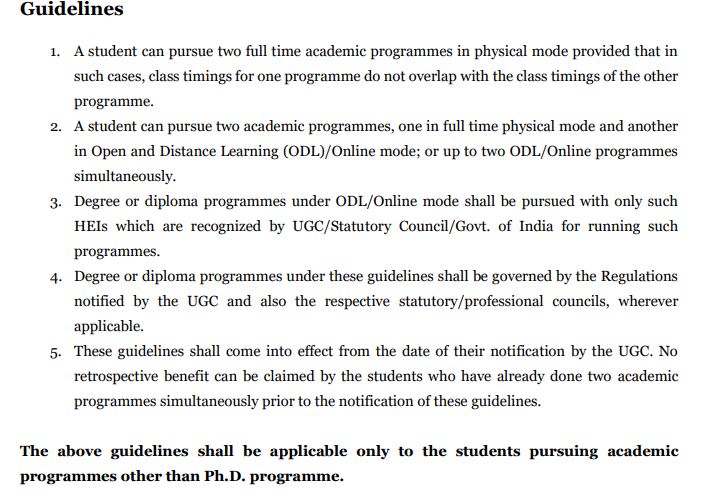